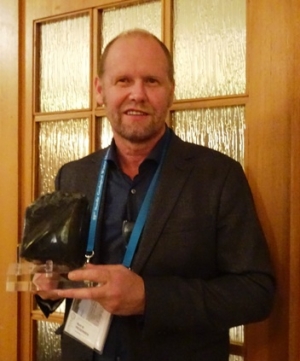 The Nordic Geoscientist Award 2016 is granted to a scientist who during his or her career has advanced specific fields of the geosciences and has been strongly involved with the society around us. The prize is given biannually and the nomination committee consists of the presidents of the Geological Societies and the Director Generals of the Geological Survey. The prize comprises a framed diploma and an engraved plate of stone, this time designed by Helena Korkka and sponsored by Palin Granit Oy.

This year we have fixe excellent candidates. However, after two preliminary voting rounds the decision was quite unanimous.

This year’s nominee is famous in his field. It is rear that we can give the award to a person who has initiated a new field of science and besides that, is working closely with industry and promoting science to the general public. All in all he is well worthy of the award criteria – by both scientific and societal merits.

He is well known among the scientists studying seafloor geology and geobiology of deep ocean basins. He is a pioneer in the scientific field of geo-bioscience – a science that builds on both geology and biology.

In particular he has studied the Arctic Mid-Ocean Ridge system using submersibles and underwater robotics. His studies have resulted in new understanding of the volcanic processes and to the discoveries of deep-sea hydrothermal systems, seafloor mineral deposits and unique, deep-sea ecosystems.

Lately he has become involved in CO2 storage related research that is focused on sequestration of CO2 in the oceanic lithosphere, and on seafloor leakage scenarios and their environmental consequences.

The winner has been the driving force for the establishment of a new Centre of Excellence at UiB, the Centre for deep sea research, where he is appointed Centre Director. The new centre will be one of the world's leading environments for basic research on the deep ocean layers and will continue the work at Centre for Geobiology. He is currently establishing a Norwegian marine Robotics Facility that will not only enhance Nordic capability for deep ocean research and exploration but also help in developing marine robotics for industry.

He is also well known for his interest and capability to communicate science to general public. He has made TV movies and last fall he was involved in Transatlantic science week promoting Norwegian sciences across the Atlantic.

I am sure that by now many of you have guessed the winner.

He is Professor Rolf Birger Pedersen,

The founding father of the Centre for Geobiology (CGB) at the University of Bergen, an institution that is searching for new fundamental knowledge about the interaction between the geosphere and biosphere and educates new generations of interdisciplinary geobiologistst.

It is my honor and privilege to give the Nordic Geoscientist Award 2016 to you professor Pedersen.